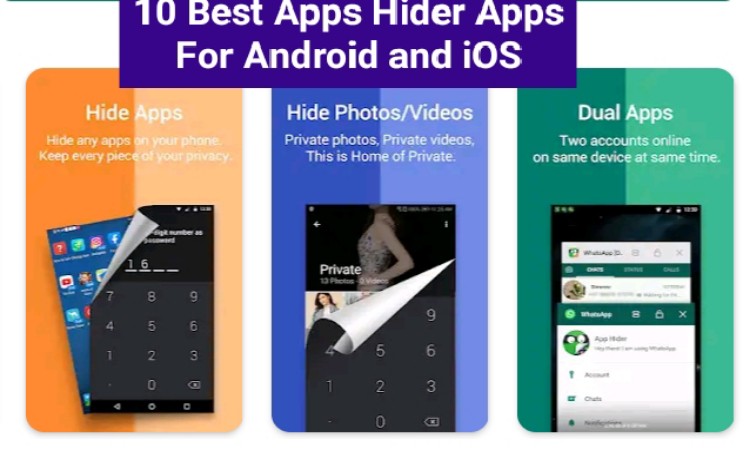 This article will provide you with 10 best apps hider for android & iOS in 2022. If you have been searching for the best app to download and hide other apps in your android or iPhone. Trust me, you will be glad to stumble on this site today.

Before sharing this post, I downloaded over ten Apps hider using my android phone. Also, I watch my co-worker download all of them with his iOS. We access all the apps features and filter out best apps hider that will be suitable for any android or iOS phone.

However, all of them are working perfectly, even the ones we didn’t include here. But the features is what makes the ones shared here” the best among others. Hence, I will list all of them for you to choose the one that’s suitable for your phone, and also have the features you want in apps hider.

Obviously all phone users have one or more data they wouldn’t want to share with anyone or want someone to see. Hence, hiding them in a third party app becomes the only alternative” what do I mean? If there’s an app you wouldn’t want anyone to see, or have access to’ then use any of the below apps hider to keep them private.

There are hundreds of apps hider on Google play store and app store, but they have different features. Some claimed apps hider for android doesn’t have the capacity or feature to hide apps on android. Rather they can only hide pictures, videos and other files.

Just as I said earlier, we have filtered out the best apps hider” that works perfectly both on android and iPhone.

The first app I will recommend to you guys is calculator vault, it’s absolutely for free to hide apps and other relevant files. This app is super cool for android and iPhone, I have access the features before recommending it. 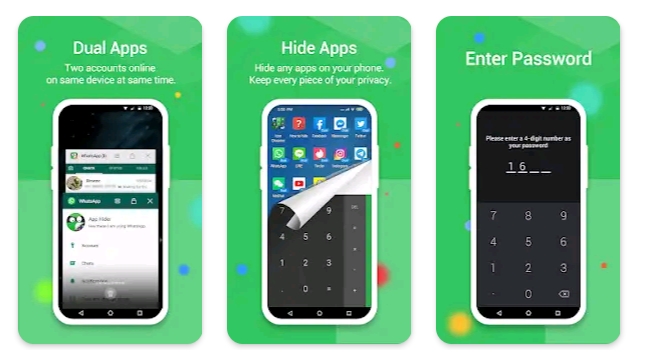 All you have to do, is to download and install it, open and create a password. Just as the name implies, it has a calculator outlook, which you can use as a phone calculator.

READ NOW – How To Open Calculator Vault App Without Password

The app is very easy to access, all you need to do’ is to set up a password to unlock and access the apps that will be moved in the app. When you’re done setting up the password, open it” drag and drop any app you would like to hide in the third party app.

You can as well change the password anytime you feel like. The amazing thing about this calculator vault is that’ you can actually chat the developer on WhatsApp, in case you encounter an issue. Cool right? Rush now and download on Google play store, click here.

It sounds like it can only hide photos right? Smiles. Well, this app is one of the best and highly recommended apps hider, with over one million users all over the world. It doesn’t just hide only pictures, it also accommodate apps, videos and others documented files you would like to keep confidential. 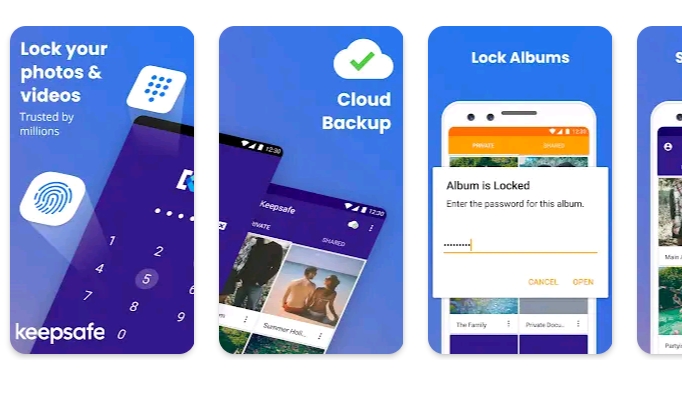 KeepSafe photo vault has a few amazing features that differentiate them from others apps that hides apps. For instance, you can choose to lock it with fingerprint or password, back it up on iCloud, all your data is 100% safe and secured. It has both paid and free version, with the premium version” you can hide unlimited files in the app.

This app is now available on Google play store, and it works perfectly on android and iOS. All you have to do right now is to download it, install and set up a password using number or fingerprint. After that, open and start moving the apps you would like to hide in the third party App. It’s very easy to move it, simply drag and drop” you will also see the illustration there. To get started, download KeepSafe photo vault app from Google play store click here

This app hider share similar features with calculator vault app hider, but yet’ have few unique features that marks it different from others. Calculadaro cofre app hider have thousands of users and massive positive review on how they where able to hide their apps and other relevant data using this third party app. 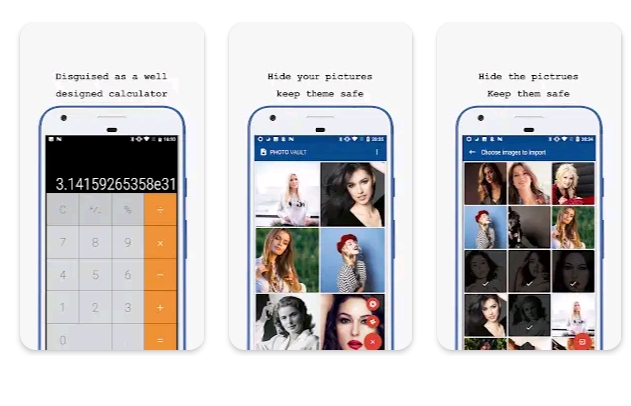 In a situation where you wouldn’t want anyone to know that’ you actually hide some of your apps, pictures and videos. Then, consider using this calculadaro cofre app, it has a calculator outlook, and you can as well use it to calculate. So, this will make it very difficult for someone think otherwise.

Just like the previous apps hider features shared here, this app requires setting up a password or use fingerprint to lock it. Before anyone can access it, he or she must use the accurate password. Meanwhile, the app is available on Google play store, you can download it here.

This app is specially developed with the aim of hiding third party apps. So, it’s function is clearly stated. And all it takes to make sure your apps are secured, is implemented. 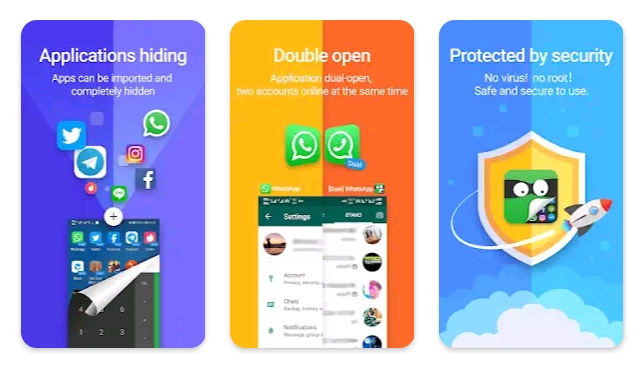 So, if you want the best “apps hider for android and iOS” then, go ahead and download this app hider. It doesn’t hang nor cause unknown error, it’s super safe’ and your is well protected. For you to download if from Google play store click here

Vault is yet’ another highly recommended apps hider to download and hide those apps you wouldn’t want someone to see. The app has millions of users all over the world, and I can practically tell you that’ it’s specially developed for android and iPhone users. 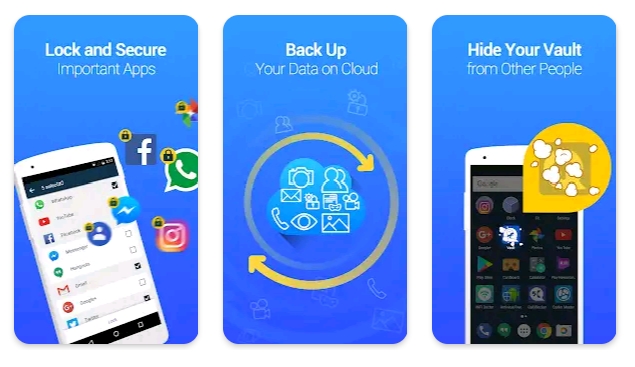 Vault app hider is straight forward, and very easy to access. It does nothing else, but to hide third party apps and other files. Using this apps hider is absolutely for free, with over one million users and huge positive reviews, I can assure you that’ the app is super cool.

All you have to do, is to download and install it” create a password or use fingerprint as passcode. Then, import the apps you would like to hide and that’all. Meanwhile, it’s available on Google play, you can download it here

Hide app is a straight forward apps hider, with thousands of users all over the world. It has both free and premium, you can decide to hide as much apps as you want. 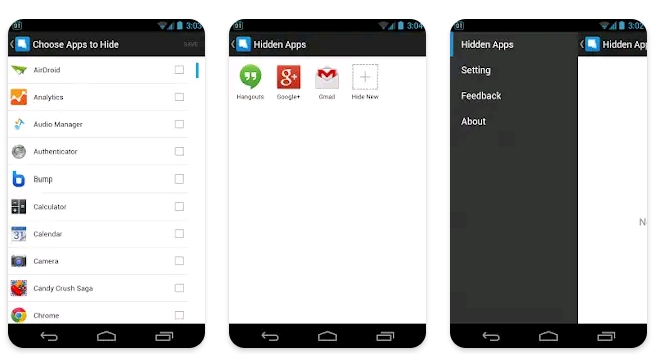 The apps hider have unique features that differentiate it from others. It works perfectly on iPhone and android phone. The premium version gives you access to hide unlimited apps and other files.

Accessing hide apps is very easy, all you have to do is to download and install it, create a password and import apps you would like to hide in this app. The app is available on Google play store, to download right away click here

This is one of the best and outstanding apps hider I will recommend for you. Dialer Lock works perfectly on android with no root. 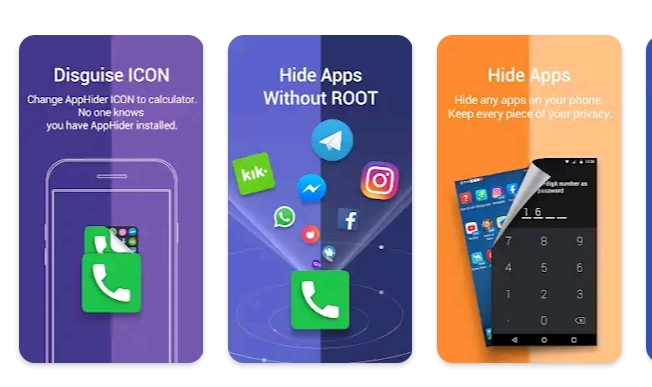 As at the time we recommend this as one of the best apps hider, they have added new features” and kept on discovering more that will help keep your apps and other files safe.

You can use this dialer lock to hide any app, it’s free and also have premium version. After downloading, instance and create a password you won’t forget so easily. Then, move apps you would like to hide by dragging and drop” the option is there already. To download from Google play store click here

Private vault is another powerful apps hider app that enables you to hide any kind of app. With this app, you can as well hide pictures, videos and other files you wouldn’t want anyone to see. 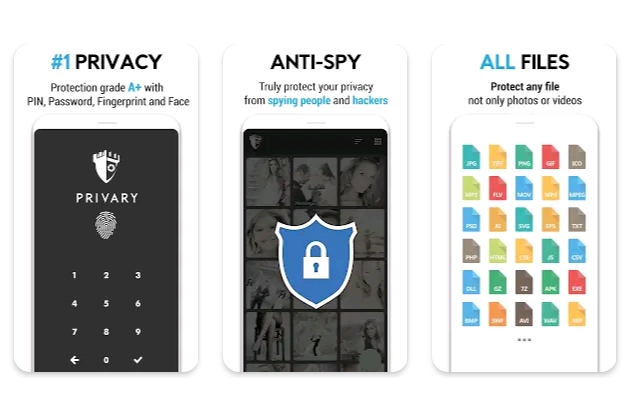 One of the amazing and outstanding feature of this app is that’ no spy software can penetrate on the files hide in it. It’s very secured and easy to access.

You can choose to luck it with either fingerprint or PIN password. Using the apps hider app is absolutely for free, but it also have premium version” just like every other apps hider. Currently, it’s available on Google play store’ you can download and install here.

This app is very unique and outstanding in its own way, infact’ I will recommend you to download and use it to hide your apps. In a situation where you wouldn’t want anyone to know that’ you actually hide some of your apps, then consider using clock. 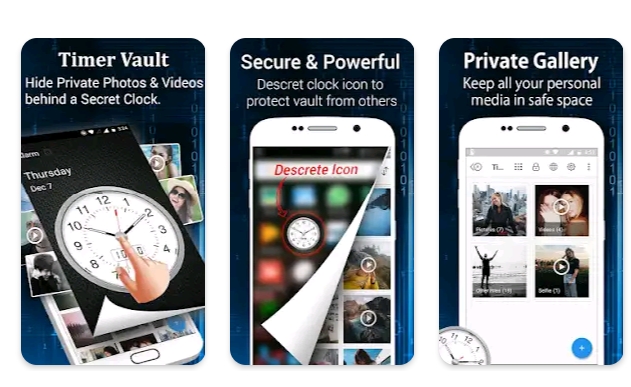 It’s outlook is exactly like clock and it tells you the accurate time, and trust me’ no one will ever suspect it’s an apps hider. Unless someone who also use it or have seen it elsewhere.

Thousands of people are using it already, and it works perfectly on both android and iPhone. You can download and install the app from Google play store, then set up a password’ either with fingerprint, facing lock or PIN. After that, import the apps from your phone background to the App. To download tap here.

Hyde is another powerful android apps hider to encrypt apps you wouldn’t want someone to see, if the access your phone. With this app, you can easily drag any app and hide it in it, then’ lock it up with a pin password. 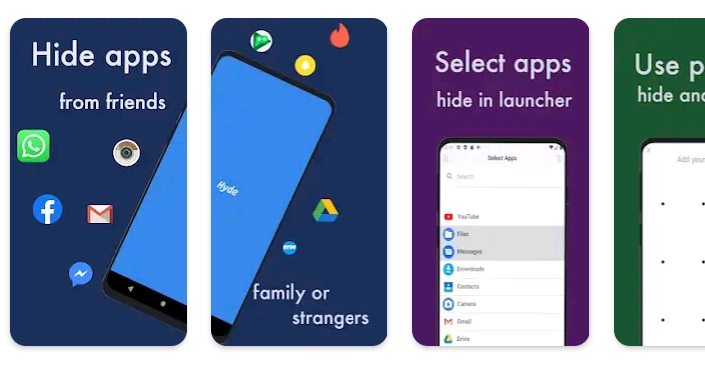 Normally, whenever someone access your phone’ they look up to seeing your emails, text messages, and check your social media chats. Hence, you can hide all the apps and make it invisible with hyde app.

Using this app is absolutely for free, but you can choose to purchase the premium and encrypt as many apps as you want. To download and install hyde app from Google play store tap here.

Wrapping up the content, I hope you where able to download one among the 10 best apps hider for android & iOS? Ohh yes, I’m glad you have gotten what you’re searching for. Feel free to look up to our related articles, and don’t forget to give us feedback.